Masada fortress, and an amazing story 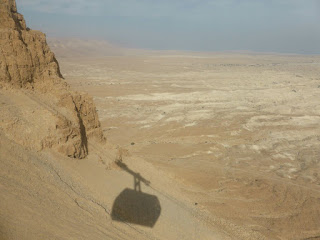 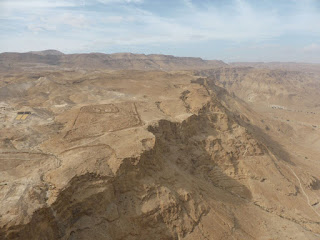 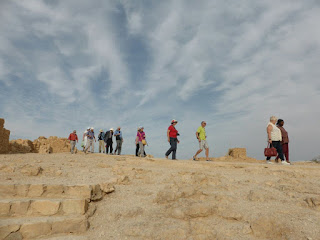 As well as visiting the Dead Sea yesterday, we went to the Masada Fortress on the way. It is in a very remote and barren area, but was built near to a spring and oasis. In ancient times it was an important security post on trade routes from Jerusalem
The fortress is situated on the flat top of a mountain and had high walls all around the cliff edges. It was built in about 35 BC King Herod, and he used it as a luxurious winter palace.
Move forward about 100 years, and it then was occupied by a group of rebels who were hiding out from the Romans.
We caught a cable car up to the top to look around. The views were tremendous and we saw the remains of huge storage rooms that would have been filled with food and provisions.
The story continues - in 73 AD Masada was the last rebel stronghold and the Roman Tenth Legion arrived and laid seige to the mountain. They built a wall all around the base of the mountain and camps for the 8,000 troops to live. Almost 2,000 years later the stone remains of both the camps and walls are still there - look closely at pic 2.
After a few months the Romans had managed to build a huge ramp and broke down the rebel defences. They decided to wait overnight and then start the final battle the next morning.
The rebels knew then that all hope was lost and decided that they would all rather die, than live as Roman slaves. There was about 960 men, women and children in the fortress and instead of preparing to fight the Romans, lots were drawn amongst the men. Ten were chosen to kill the others and everyone else laid down and waited to be stabbed to death.  The remaining ten then drew lots for one of them to kill the other nine and then the final rebel committed suicide.
They did it that way as it was against their religion to commit suicide, so only one of them would have committed that sin. Also, only ten of them would have committed murder.
It all went as planned and the next morning the Romans were amazed when they advanced to find the Fortress completely silent.
The rebel group was called the Zealots, and this is where the word zealot originated.