Paul do Mar round trip 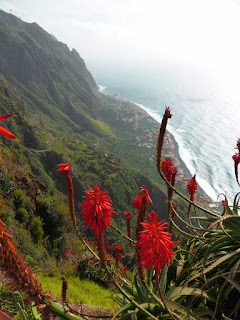 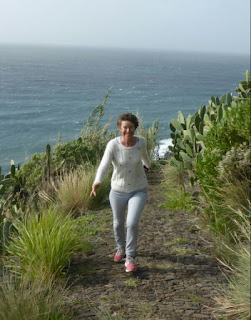 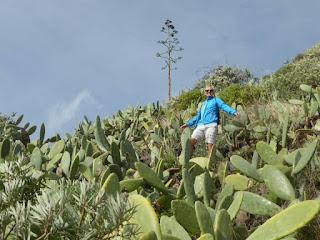 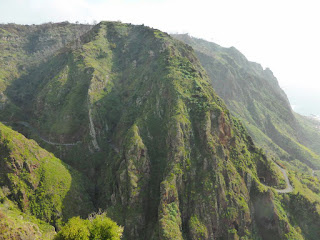 Caught the bus to Paul do Mar this morning. It is a seaside town that runs along a narrow strip of land in front of incredibly high cliffs. It can only be reached through tunnels at either end and is isolated and quiet.
There is also only one bus in and out per day, so we had to make sure that we were on them.
The bus stop is at sea level at the top of picture one and we then set off through the town, stopping for a quick refreshment and planning session on the way.
I suggested taking the path at the end of the town up the cliffs. It was a great walk with lots of lovely views and flowers, and we successfully reached the top.
Daz suggested that we take the main road back to the town, and I thought that a great idea as the bus would also be using that road, so we couldn't really miss it.
Off we went and after walking a few minutes we rounded a corner and were amazed to see the view in photo four. The road was streaking away from us, disappearing into a tunnel and then re-emerging further down the mountain.
We walked along, happily enjoying the views and taking photos.
Once we were through the tunnel I realised that we only had about half an hour until the bus was due, we were still really high up and there was not a bus stop in sight.
We started to jog a little, following the hair pin bends down towards the town. We carried on jogging, then maybe even broke into a little run. Still no houses, bus stops or any other traffic on the road.
Time was ticking on but we were making good progress and with about five minutes to go we were on the edge of town. No sign of any bus stops but surely it would stop anyway?
Suddenly a bus pulled out of a side street about 100 metres ahead of us and drove down the road. I sprinted along after it, maniacally waving my arms over my head and jumping up and down - where is my stunt double when I need them?
It turned a corner and was out of my sight, but Daz was ahead of me and still chasing. It stopped - hurrah - and it turns out that was not the right bus!
I collapsed onto the pavement to get my breath back and the right bus turned up about ten minutes later.
Good outing, albeit with a bit of unnecessary drama!