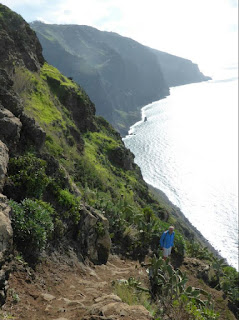 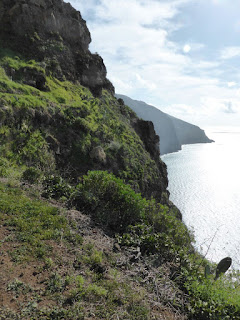 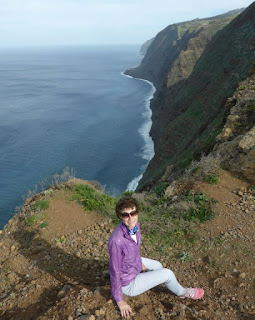 On the bus again today to the most western point of Madeira, at the little town of Ponta do Pargo. It only took 40 minutes to get there on the crazy country roads, but when we arrived it was blowing a gale and was much colder than at our seaside hotel.
We set off towards the cliffs and to a path that I had read about on the Internet. We found it, walked for a few metres and then it just headed straight over the cliff edge!
My fear grew enormously as I looked down at Darren who was a bit ahead of me. We were 350 metres above sea level, the cliff was almost vertical and we could see straight down to the seashore below us.
Darren was keen to try to walk the path, and I followed him downwards for a few minutes. I then made the mistake of looking back to take a photo of the route that we had just walked - number two - and scared myself half to death.
We carried on down some stone steps, although they were quite steep, but the handrail calmed me down nicely. Unfortunately, I then looked ahead and could see that the next section had no handrail, but just snaked down into the distance.
At this point I whimped out and I retraced my steps, all the while walking in a strange loping way as I tried not to crawl on all fours.  I am a bit mad with myself now, and I am sure that I could have done better if the wind had been a lot calmer. Well, that's my excuse anyway!
Afterwards we walked to the lighthouse at the very end of the island and had a little picnic while we enjoyed the view. Ps, is there anyone out there who could volunteer as my occasional stunt double?