Fish in the kitchen

I need to think of something to write in the blog today because I have to mention an incorrect fact included yesterday.

I said that we had never lived in a four bedroom house before, but it has been pointed out to me by two knowledgeable sources that we did at Tennis Drive.

In my defence, firstly I forgot about it, but secondly it had three bedrooms when we moved in, and we built another one at the back of the enormous garage. However, just as it was finished a guy called Paul knocked on our door and asked if we would sell the house to him, which we did. So, we never got to use it, so it doesn't really count.

If that isn't an apology then I don't know what is!

Moving swiftly on, I have painted the kitchen grey and am very pleased with the look. 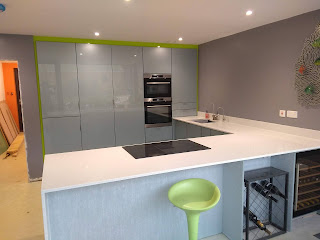 We have also put the steel coral and fish up in the corner above the wine cooler. I am not sure if they are happy there, but it took quite a bit of effort to get the coral straight, so they are staying for the time being. 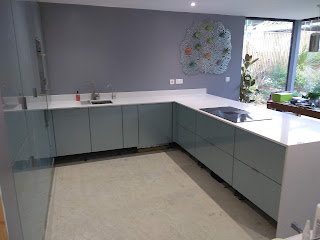 Ps, Darren has the second set of stairs up and is half way through the third.