So, yesterday Graven Hill sent out a warning on Facebook that there would be a 'noise event' today between 12 and 2pm. How exciting.

I kept a watch out and just before 1pm I looked out of the window again and saw people and photographers gathering. 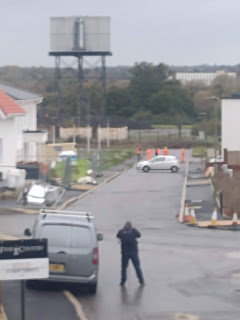 Obviously, the 'noise event' was imminent, so I dashed down to get a closer look. After a few minutes I heard the countdown from 10 to 1, and then there was a big bang and a cloud of smoke. 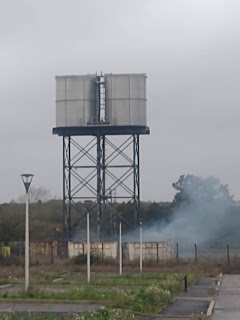 Nothing happened after that though, and the water towers were still standing. After a few more minutes news came through that it had not worked, so everyone started to wander away.

We thought that it would be a long time before they fell because it would be dangerous to investigate the issue, and set another charge.

Imagine then my disappointment when I looked out of the window at 2pm and realised that the towers were already down.

I thought that maybe they had fallen while everyone's backs were turned, but I checked on Facebook and actually a large digger pushed them over. 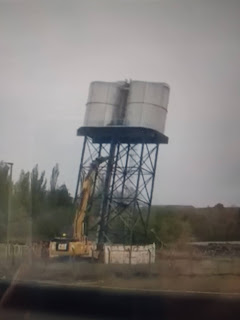 A sad end, but in a way I am pleased that they put up a good fight.