Back to normal tomorrow, but we have just had almost four days off.

Thursday in Hove, Friday in Brighton. 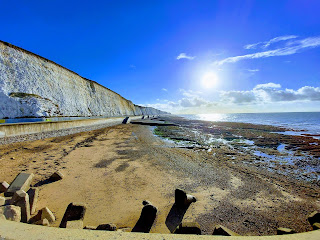 Saturday we had a lovely visit from Tina and Matt, and Matt almost got some complicated IT stuff up and running for us.

Today started well and we got on our bikes to cycle down to the station to catch the 8.52am train to London. I then realised that I didn't have my lock so we had to go over to the plot to pick it up. Unfortunately this meant that we would miss the train, so we hung about for a bit. Setting off again for the next train and Darren realised that he didn't have his mask, so we had to go back to get it.

Arrived at the bike park and I realised that I had lost the key to the lock, so I had to leave the bike unlocked for the day.

By this time I was almost screaming in frustration, but the train arrived in London ten minutes early, and the rest of the morning was very successful. We went to the Kyoto Garden at Holland Park to see the beautiful Autumn colours. 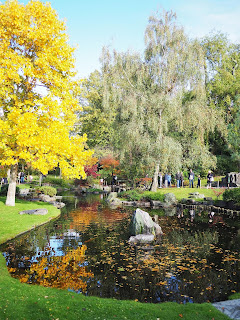 It is a lovely Japanese garden, and quite a few people had the same idea as us, but it was was quite peaceful too, apart from a park employee who shouted out very loudly at anyone who dawdled when crossing the bridge. 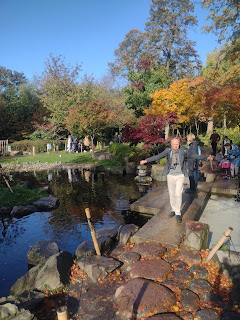 After that we were joining Susan and Paul at a very fancy restaurant for lunch, and I found it on the map on my phone. We arrived at the destination exactly on time to find no sign of the restaurant. Checking the details we were in completely the wrong place and had to walk, catch two tubes and walk again to arrive there nearly half an hour late. (S and P didn't seem to mind and both had a glass of champagne while they waited for us.)

Excellent lunch, and then the train back to Bicester. After the day that we had I guess that you are expecting me to say that the bike was missing - but hurrah it was still there.