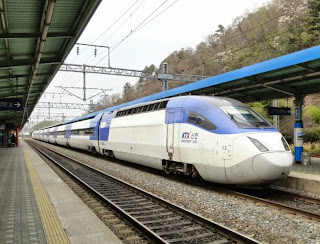 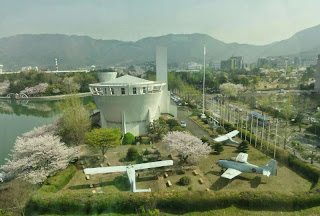 We made a bit of a school boy error today with our map reading. All of the words were in Korean, but we found an area where a lot of train lines joined together, next to a big building, and assumed that that was our station. We caught a bus there and then found out that it was not!
In a panic we hailed a taxi and tried to explain that we needed to go to the station. I did a comedy impersonation of a train complete with arm movements and 'choo choo' sounds, but he just looked bemused. We tried the English approach of just repeating the words 'train station' loudly and expecting him to understand. He kept repeating it back to us and eventually decided to take us there, but he was very worried and kept turning round to ask us questions in Korean.
We arrived with less spare time than we originally expected, but we caught our train with no further problems, but probably a few more grey hairs.
The train had a little screen in the carriage to show the speed - it reached 294k per hour - and we arrived in Seoul in style.
Speaking of style, our last hotel had a large mural of Paris and a green ladybird light on the wall, as well as a lovely view of Changwon.
However, todays hotel room is bed shaped, has no room to swing a cat, and pink curtains but no window behind them. The good thing is that we are right next to our meeting point for tomorrow, as hopefully we have a big day planned.
Ps, just been round the corner for a coffee and the shop had the following message etched in English on the window - 'When I taste the little world, a wind-bell blessed me.'