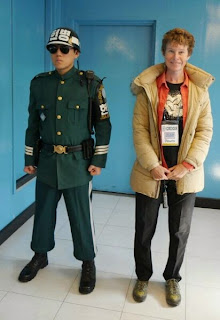 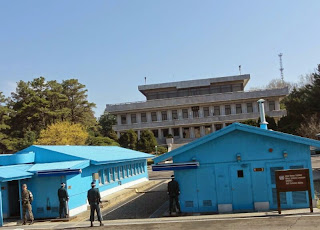 Slightly scary outing today as we went on a trip, partly run by the US Army - to North Korea!
Actually, it is a bit more complicated than it sounds. On either side of the border between North and South Korea is a two kilometre wide DMZ (demilitarised zone), which, with one tiny exception, is completely uninhabited. On the southern side of the DMZ is a 20 feet high wall and bank to stop any tank attacks. Beyond that is the most heavily mined area in the world, then after that are enormous barbed wire fences - the last of which is electrified.
To get to the border our coach had to drive through the DMZ on a road through the defences, however, in the gap at the anti-tank wall there was a large bank of rocks, filled with explosives that could be detonated to immediately fill the gap if necessary.
Once through this we got to an area called the JSA (joint security area) where both North and South Korea have separate buildings that face each other.
Our soldier guide told us that when the North realised that the South's building was slightly taller, they added an extra storey to theirs just so that it was the tallest.
In between them are a few single storey blue buildings. (See pic 2 - and the grey building in the background is in North Korea).
The blue buildings have a door at either end and they actually straddle the border. This is where meetings between the two Koreas are held - at a conference table exactly on the line.
We went in for a look around and I walked across to the North Korean side of the room, stood near to one of the South Korean guards and had a nervous looking photo taken. That was as far as I got into North Korea - about three metres.
If you look closely at the second photo you can see some of the South Korean guards who were watching the border - two are half hidden from view in case of attack, and as our guide told us, it wasn't the guard in the middles lucky day.
Ps, you might just be able to see a North Korean soldier on the steps of the grey building.