Getting lost with Zaha Hadid 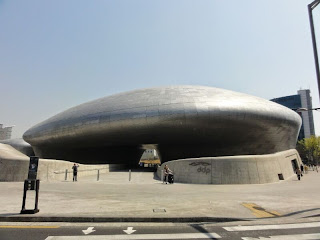 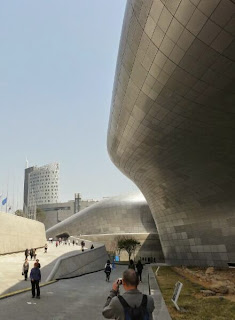 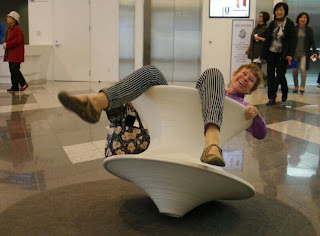 We walked to the Dongdaemun Dream, Design and Play building today that was designed by the world famous architect Zaha Hadid.
She also designed the Aquatics Centre for the London Olympics and is known for never using straight lines in her buildings.
That may be all well and good on paper, but in practice, for us it just caused chaos. Of course, it would have helped if we had a map in English, rather than Korean, but that doesn't usually stop us from getting around.
The map we had was a strange attempt at 3D on flat paper.  The building was a weird 3D wavy, shiny, doughnuty thing with endless corridors and stairs, that led in surprising and random directions.
Maybe that was what Zaha intended - if so she succeeded, and it was certainly memorable.
She also designs furniture without straight lines and one chair was great fun, but not very relaxing.
We paid to go in some of the exhibitions and one seemed to be playing a joke on visitors by sending us through dungeon like corridors  before getting to what looked like a school woodworking project.
It featured the designs of Enzo Mari and was a 'human-centered design' with an 'allegory towards Utopia'.
Another was a total mystery, with lots of German magazines on display, and subtitles in Korean. I have just read the brochure and apparently it was called Ulm Models - Models after Ulm: 1953 - 1968.
Curiouser and curiouser.