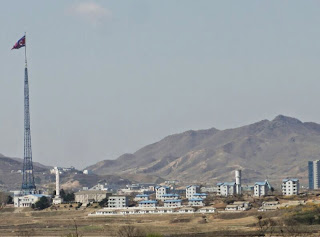 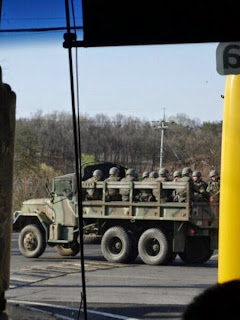 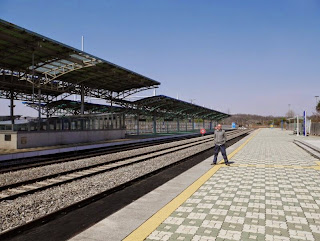 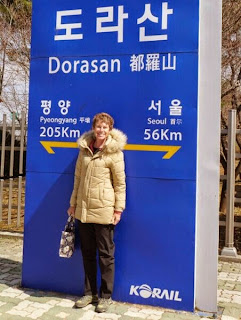 For the rest of our day we toured around the DMZ and surrounding area.
The first photo is of one of two villages inside the DMZ zone itself. They existed before the border was created and one is in the south, but this one is in the north. It is known as a fake village as most of the buildings are just facades, and hardly anyone actually lives there. It was built for propaganda purposes and to make people from the south jealous of such a modern and beautiful looking place.
We were not allowed to take photos of the southern village, but it also has a large flagpole. The story goes that the northern village put up a 50 metre high flagpole a few years ago, so the south put up a 100 metre high one, so the north then put up this one which 160 metres high, and it flies one of the biggest flags in the world!
Picture two is of South Korean troops that Darren took through the bus window, although he shouldn't really have taken it, and if our guide had seen there would have been big trouble!
Pictures three and four were taken at Dorasan Station which links Seoul with Pyeongyang, (the capital of North Korea). Due to the hostilities between the two countries it has has never yet been used to carry people, although the south hopes that it will in the future.
It was a massive, modern station and we had it all to ourselves, which seemed really weird.
Very, very interesting day.