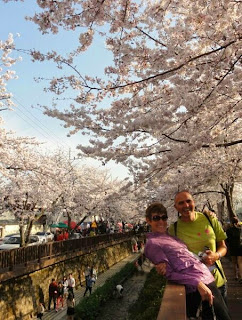 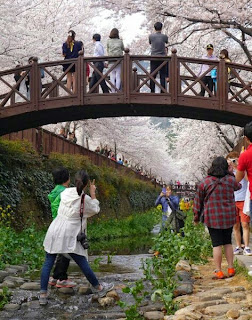 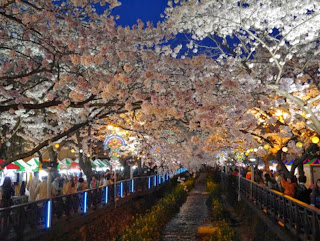 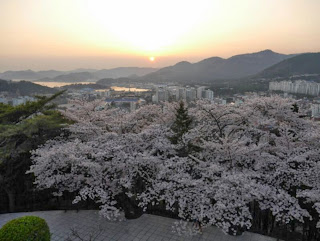 Today was a big day as we have spent a lot of time arranging to get here, and we have allocated three nights of our trip to make sure that we are in the area to see the festival.
There is very little written in English about this huge festival, but apparently over two million people visit it every year.
Our Google map had hardly any English words on it, but we found Jinhae on the edge of a horseshoe shaped bay, through a long mountain tunnel from our hotel in Changwon.
I got off the bus in Jinhae feeling very excited, but there was no one else around. I will spare you the details, but two and a half hours later, we still had no idea where the festival was and we had walked for miles.
We knew about the train, (see previous blog) so we had been following a train line, but it turned out to be the wrong one. Even the stations were not written in English on the map, and no one spoke enough English to help us.
Eventually, we found a different train line and suddenly, thousands of people were standing along it, and hundreds of food stalls lined the route. We even found a Tourist Information tent and I got a brochure. 'It explained that we were at 'The feast of spring with the 360,000 roots of cherry blossom'.
We then discovered that there was not one large festival site, but there were different locations around the whole area - just none where we got off our bus.
We went to the Yeojwacheon Romance Bridge and followed the 2k cherry blossom tunnel along the stream, along with thousands and thousands of people.
We also went to the top of a hill to see the whole panorama, and finally, an enormous fireworks show, before eventually heading back to our hotel.
We were exhausted after ten hours marching around, but pleased that we could give cherry blossom viewing a big tick.