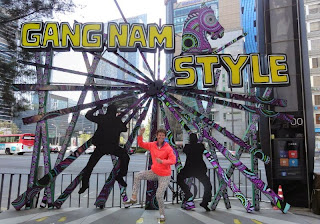 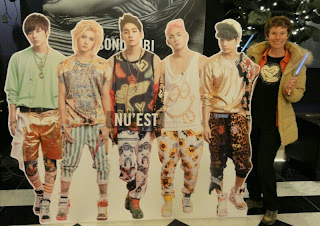 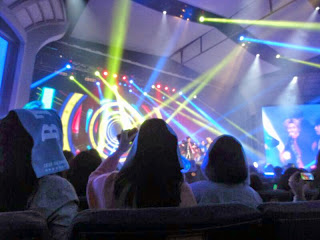 I am so sorry about the chavness of this photo, but it had to be done. Yet another pose - hope you like it Dave - in the actual Gangnam area of Seoul, made famous by Psy.
Since we arrived in Korea we have been listening to lots of K-pop (Korean pop music) and have got to really like it. Our favourite group are Orange Caramel and their latest song is about sushi. It is all in Korean, but the group is made up of three girls, and in the video they dress up as pieces of sushi and sing 'oy, oy, oy,' as part of the chorus.
We chose our latest guesthouse because it advertised free tickets to a K-pop concert, and we went last night with the owners mum and her friends.
It was really good, and we saw five different acts including Nu'est (see photo), 4men - this group was confusing as there are only three of them and last night only two as one was ill, and BTOB who we think are the most famous, as all of the girls screamed loudly and sang along from beginning to end.
The girls in front of us were funny as they all had little scarves with BTOB written on them that they draped them over their hair, they waved strange blue lanterns and videoed the performance on their phones.