I waited all day yesterday for a delivery of 180 breeze blocks and they didn't arrive. When I phoned the builder's merchants just as it was getting dark, they said that they were just about to ring me to say that they weren't coming! - liars!!
Anyway they promised that they would bring them first thing this morning.
I was heading to the site at 7.45am this morning and saw that the other builder's merchants van was pulling out of the end of our road.
Straight away I knew that this spelt trouble, and when I got there he had dropped my plywood sheets right in front of Trevor's cement mixer, and right where the other van would want to put his stabiliser. 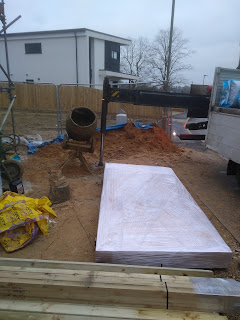 Also, the sheets are heavy and difficult to move, so I had wanted them to also be dropped off on the loading bay.
Two minutes later the other van arrived, but the driver was lovely. He put my blocks up, and then carefully balanced the plywood on the top, but with a warning that we might be overloading the loading bay. 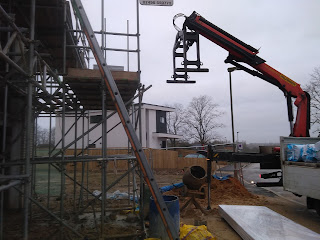 Just as he started lifting another driver with a giant van wandered over, and he was trying to deliver to next door but one, but no one was around.
I tried to contact Fred the owner and ended up running backwards and forwards between both drivers, but eventually everything was where it should be.
Daz and I then spent a difficult half hour lifting the plywood.
Straight after I had a tea break, and later Fred called round with a fancy bottle of Chablis as a thank you.
Posted by Christine at 09:42