This morning we decided to visit our double glazing company to finalise the colours for the window frames and front door.
After spending at least an hour hour studying their standard colours and not really loving any of them, our salesman then announced that the colour that we had chosen was no longer standard after all but would cost at least another £1,500.
This was obviously very annoying, but then  he suddenly found another colour that we had not yet seen that was a new standard colour.
I think that he should sort his display boards out, but anyway it is a nice dark, warm, greeny, grey shade and we chose it for the frames.
We were still struggling to decide the colour for the front door, but then we went a bit brave and chose bright orange. 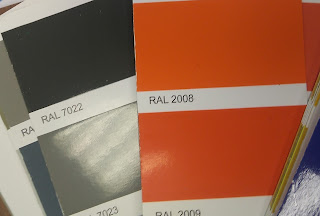 It's the one on the bottom right, and the window frames are the top left.
We are really pleased with them and they will certainly brighten up the street.
Speaking of the street, our neighbours are also coming on well with their houses and it's starting to take shape. 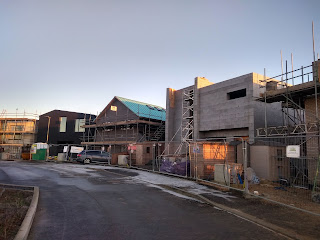