Laos to Thailand by bus

This morning started off very well, as a truck arrived at our hotel to take us to the bus station for our journey from Laos to a city called Udon Thani in Thailand. It was only 40 miles door to door and was expected to take three hours. 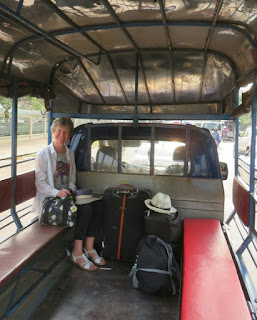 We sat in front of a young couple and their little boy who spent the whole trip leaning over the seat and taking an intense interest in everything that we were doing. Occasionally he would stroke my hair and be told off by his dad, but the worst thing that he did was to sneeze loudly onto the back of Darren's neck. 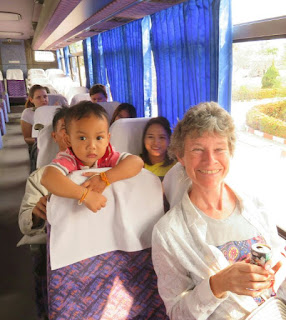 We all had to get off at the Lao border and troop through the immigration booths, then get back on again for a trip across the Friendship Bridge across the Mekong River no man's land. At the highest point of the bridge the flags changed from Lao to Thai so we knew that we were half way there. 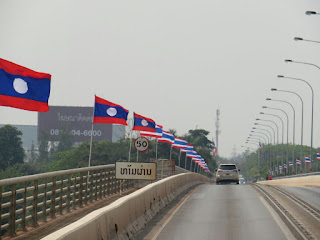 At the Thai border we had to get off again, collect our cases and go through the Thai inward immigration. It all went well, although it was interesting at the customs section, as it was manned by at least three staff members, but the suitcase x-ray machine had a sign on it saying that it was broken. It had obviously been that way for a long time as they had placed pretty pot plants all of the way along the conveyor belt and the staff just smiled and let everyone through.
We arrived at Udon Thani with plenty of time to spare and all we had to do was to get a tuk tuk to our hotel. It was less than 4 kilometres away and right next to a large lake. We couldn't get any of the drivers to understand where we wanted to go and even showing them the map on my tablet didn't help. In the end we started to walk and then  asked a few more drivers, but with the same result.
We eventually thought that we had sorted it after a driver took my tablet into a shop and the lady shop assistants tried to help. There was a roundabout next to the Iake and with a lot of hand signals I said to take us there.
We happily set off but the driver soon turned off the expected route and took us to a massive, but completely wrong roundabout! We were in despair but then he set off again and eventually reached the opposite side of the lake to the one that we needed. I was so grateful that we got out there and walked the rest of the way. 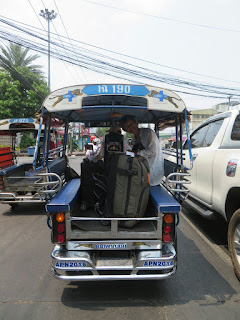 Ps, they don't get many tourists around here!
Posted by Christine at 07:41