Turn left at the goat

We stayed last night at a village called Pak Beng, which is almost half way along our Mekong River route.

Our hotel was rustic, as was the rest of the village and the water ran out in our hotel first thing this morning. It was a minor inconvenience  and we left very early to walk down to the harbour to pick up our boat.
Our guide was waiting for us and he pointed in the direction of a goat that was wandering about and told us to turn left behind it, then down onto the sand and onto our boat.
On the opposite bank of the river two elephants were bathing in the river and trumpeting very loudly. 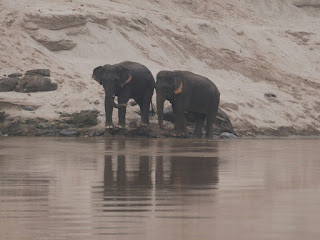 We set sail and then stopped at a hill tribe village and our problems with a lack of water paled into total insignificance. The village was built of mainly bamboo huts, with no toilets inside the village, but they have a solar panel that provides some electricity. Most people were barefoot, they hunt daily and our guide says that they eat snakes, monk, dogs and geckoes.
They were friendly, but the difference between ours lifestyles was unthinkable. 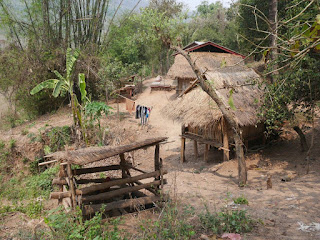 During the dry season many people spend hours and hours panning for gold, and the sand definitely had bright glimmers in it. 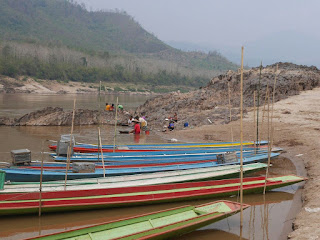 I tried looking for a nugget near to our boat, but wasn't successful and hadn't realised that Daz had taken a photo. 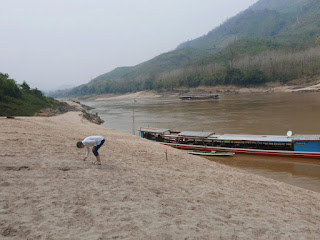 We have now finished our journey and are in a city called Luang Prabang. We have been out along the main street and unbelievablely it reminds me of Brighton as it is full of expensive and fancy shops, bars and restaurants. It even charges Brighton prices, yet only 40 miles away are people who do not even use money!