Kew Gardens in the nighttime

We went back to Kew Gardens for a special event called Japan After Hours. 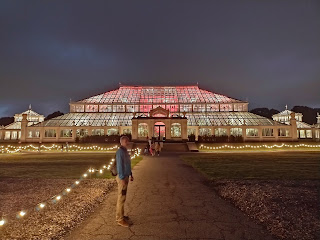 It was almost dark as we arrived and followed the lights towards the Temperate House. Just outside it was a stall selling Japanese food so we bought a okonomiyaki each. Very tasty savoury pancake with cabbage, okonomi sauce and bonito flakes. I don't know what all of that means, but it was lovely.

At the entrance to the House was a lady giving out origami flowers and butterflies, with a message attached. We got 'shooting stars burn bright, clinging raindrops magnify shadows lengthening' and 'when I ate a persimmon the bell rung the Horyuji Temple'. 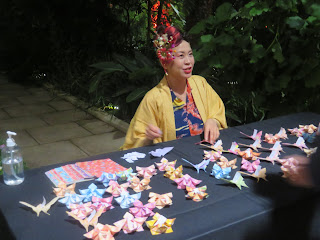 Once inside there was red lights shining on the plants, Japanese electronic music, but best of all, a Sake tasting bar. 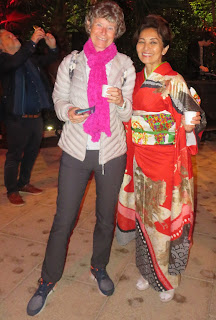 They were very generous with the samples and Darren managed six of them. The variety was surprising and I liked the sparkling sake and Darren the plum flavour.

We briefly stopped to see a bit of ikebana - flower arranging, wagashi - traditional Japanese sweets making which tasted of the bean paste that we really don't like, and then chatted to the Kew bonsai expert. 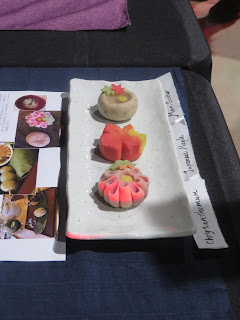 All good fun and very interesting, particularly when combining it with the sake tasting.
Things got extremely strange though at the Butoh Dancing performance. 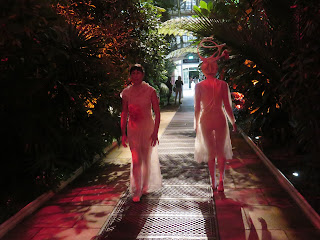 The brochure says that the dancers embody the flower in its stages of blooming, fragrance and decay. 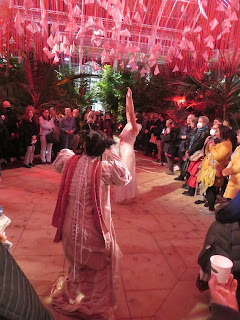 It was all in extreme slow motion, and they were definitely not happy flowers, particularly in the decaying stage, and I don't know what else to say about it. Except that it didn't get people up on the dancefloor.