We caught a bus up the hillside behind Funchal, along with a few other intrepid tourists to take a walk along the Levada dos Tornos. We didn't know which stop to get off at, but I had looked at the other walkers, decided that they looked more prepared than me and my plan was just to get off when they did. 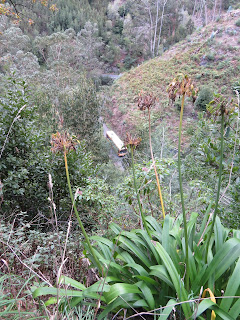 In fact, the bus driver sorted it out for us, as we passed the right stop and nobody had dinged the bell, but he stopped anyway, shouted 'levada' and we all tumbled out. Which way to go then? One couple had been there before and seemed confident so we followed them, but then I (hurrah) saw a signpost in the opposite direction and then we all reached the levada.

The start was guarded by a large goat that was keen to investigate the contents of Darren's backpack, but we made it past and on our way. 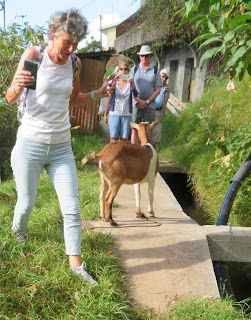 It was a nice easy stroll, mostly through forests and with agapanthus plants all along the route. 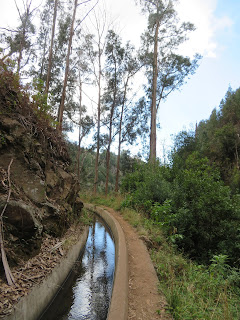 We passed a little pumping station that was filling up a huge water tank, and we even saw little fish darting along the levada. 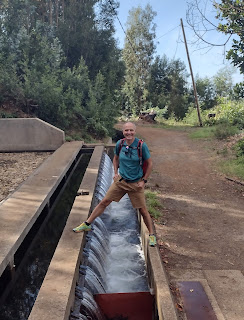 Occasionally we caught glimpses of Funchal down below us, and after a fairly short walk we cut away from the water and down to a bus stop for our return journey to sea level. 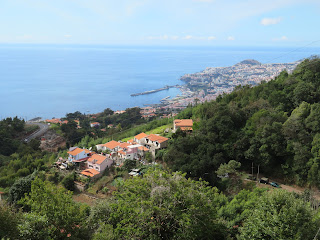 Over the past week Darren has often mentioned that he would like to go out on another dolphin cruise as he was really disappointed not to see any last time. I have not budged in my opinion that one dolphin cruise per lifetime is more than enough, so in the afternoon Darren took to the water again, while I sat in the sun and read my book. 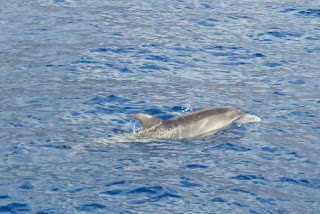