Excellent start to the day as our mini bus is really spacious, there are only eight of us on the tour and our guide, called Katya is great. She is fluent in at least four languages, can fit the minibus into the tiniest spaces and best of all, is very bossy. She insisted that I have the passenger seat next to her, and there is no way that anyone would dare to be late back at any of the stops.

First up was Camara de Lobos which is a lovely fishing village just along the coast from Funchal. 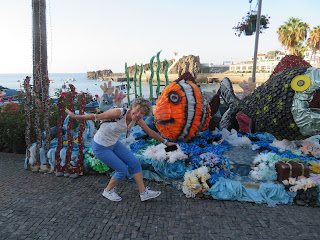 We think that this display is made from rubbish washed up on the shore, and I am trying to get out of the shot.

Next, up very windy and steep roads to a glass walkway 590 metres above sea level that jutts out from the edge of the second highest sea cliff in the world.

I am not totally happy in this photo, but I lived to tell you the facts. 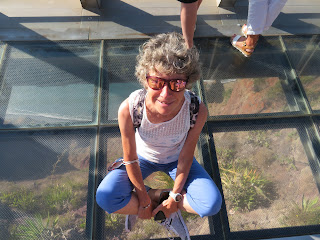 This is a picture of the view below me. 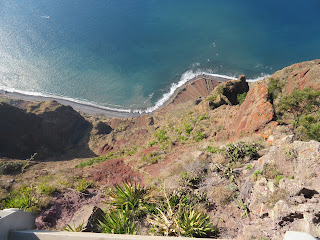 We then carried on upwards and reached a deserted plateau about 1,500 metres above sea level called Paul de Serra. For some reason Katya thought it would be a good idea to get us to pose for the photo lying down in the middle of the road. Don't show your children, she said, which is fortunate because we don't have any.

Then we reached Porto Moniz at the very tip of the north west of the island where we stopped for lunch. Katya suggested that we try the local fish speciality called the black scabbard fish or espada. She told us that it lives 800 metres under the sea and is caught on very long lines and when it is brought up to the surface it dies in a way similar to the bends for scuba divers. It's skin turns from silver to black and it's eyes almost pop out of its head. She says that it is always best to eat it before you see one because if its the other way around then you might not try it.

Anyway, it was very nice in a non fishy, fish finger kind of way. Darren had his with banana on top and I had passion fruit. One of our friendly fellow German bus trippers insisted on taking our photo, and then did it sideways. It was just that kind of a day. 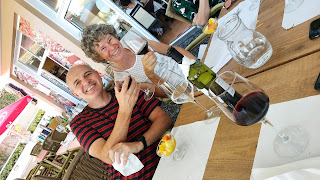 Porto Moniz was beautiful and it had a James Bond style helicopter landing pad over the sea. 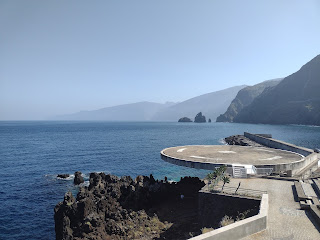 In an action packed day we then drove to see a big waterfall, although I lost track of its location. To give a bit of scale, I have highlighted the old road in blue, although now that I look at it again, it is hard to actually see the waterfall. Try zooming in.

We didn't drive this way as there is a new tunnel and there have been too many rock falls along the old road, so it is now closed. 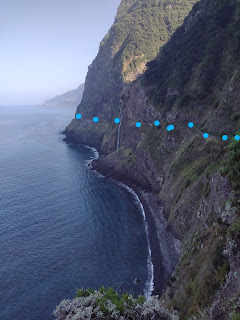 We stopped at another viewpoint, and Katya took photos of everyone on the swing instead of the view. 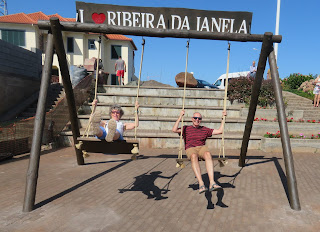 Then there was a beautiful church or two and another view, but I don't think that we took photos of those, before getting back to the hotel at the end of a very full day.