Another day, another bus trip. This time we were heading for the Nun's Valley, but we stopped off at a lovely viewpoint on the way.

We had almost half an hour here, which was a bit more than needed, and this was because we had a good bus. For once everyone was early for their hotel pick ups, so we were already well on our way before 9.30am.

The next destination was another viewpoint at the end of a narrow road with long drops to the valley floor. It was 1,094 metres above sea level, and much colder up there. 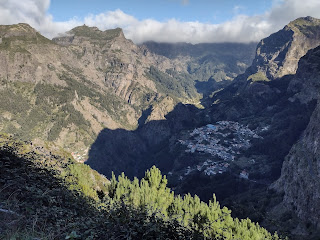 We had a great view of all of the mountains surrounding the valley, and across the mountain was the remains of the old road to the village. 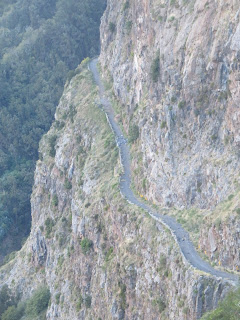 Not only did it look terrifying, but sections have fallen away and huge rocks are strewn across the remaining bits.

So now we get to the background information - in the olden days pirates used to attack the island and the islanders had a system of flares to alert the people.

The nuns lived in a convent in Funchal and they would gather up the valuables from the church and then walk up a stream into the valley. The stream wound through the mountains and was hidden from the sea, so the pirates did not realise it was there.

They then climbed up on to a high ledge and hid until the pirates left. That place is called Curral das Freiras and is a thriving village. The way to reach it now is either to walk up as the nuns did, or take the easy way and drive through the modern tunnel.

This is the view down from the village and the road continues down the valley, but eventually reaches a dead end and everyone has to drive back up to Curral das Freiras and through the tunnel. 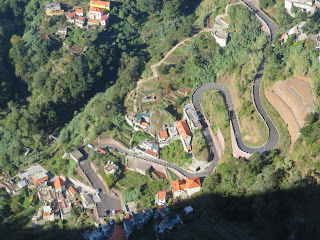 Today is Sunday and the church is in the middle of the village. While we were there the bells rang out for the start of the service, and then it was broadcast from loudspeakers on the top of the spire. 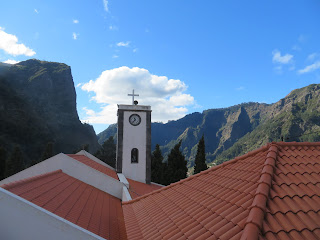 It was very nice and peaceful to sit and listen to the hymns and to imagine the nuns gathering in this place and singing many years ago. 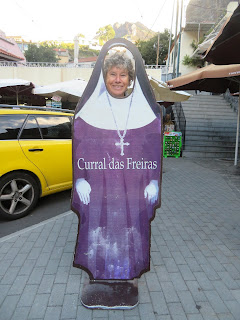