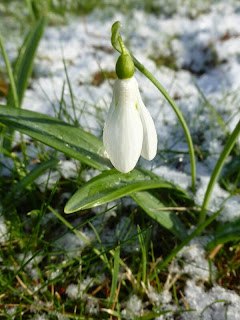 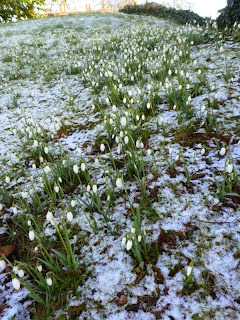 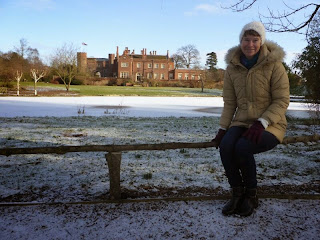 I had heard about Hodsock Priory and its amazing snowdrop display and had been keen to go for many years.
I mentioned it to my mum who said that she visited about 10 years ago and that there wasn't much to write home about. Ignoring this advice, we decided to go today.
In the car on the way there I was over excited and Darren was completely under, so we evened each other out.
It was the perfect day for a visit with bright sunshine and a dusting of fresh snow.
I cannot lie, once we got there, there was not much to see. We followed the woodland walk and then made our way around the lake to see the Priory itself (which we were not allowed in).
The snowdrops were there, peeping coyly through the snow, and by crawling on my hands and knees, I could see that they were individually beautiful.
However, the view when standing just looked like a wood with a bit of snow on it. Maybe I was expecting more, and it was pretty, just not spectacular.
Darren said that it was what it said on the tin - snowdrops in a wood. He said a lot of other things as well, but they aren't all appropriate for this blog.