Tree of the Year 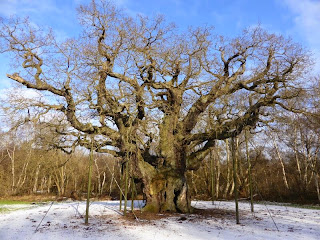 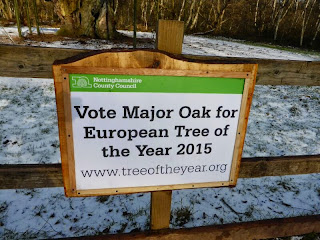 The Major Oak in Sherwood Forest is world famous as the tree where Robin Hood and his merry men used to meet and shelter in it, in around the year 1190.
We went to visit and it is looking fantastically well for its age, which is estimated to be between 800 and 1,000 years old.
Unfortunately, this means that it can't have been the exact same tree as it would have only been a small sapling in Robin's day. However, there is also the small problem that Robin, as we think of him, may not really have existed either.
Apparently by the 1,260's, popular tales about him really were told locally, although I doubt that he looked much like Errol Flynn or Kevin Costner, or wore stretchy green tights either.
In 2,014 the Major Oak was crowned English Tree of the Year, and it is currently battling hard to take the European Title. I have voted for it and I note that to date,1,906 other people have also taken the trouble to join me. Unfortunately, the Polish entry had over 2,000 votes, so we aren't in the lead yet,  although I noticed that the Welsh were trailing badly with less than 400.
I don't know if the winner goes on to try to win World Tree, or even Universe Tree, but I am sure that it is in favour of world peace and would look stunning in its leaves and a pair of large green swimming trunks.