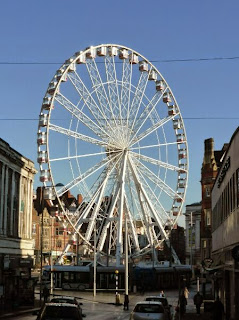 My mum's hip replacement has been a big success and she is whizzing around everywhere on her crutches, so today we said goodbye to her and my dad.
We caught the tram to town and this is the view from the bus stop as we await the Skylink.
It sounds very exciting, but Skylink is actually a normal bus that runs from the city centre to East Midlands Airport. I note that it is not called the Speedy Skylink, as it most certainly is not. It takes a very round about route, with at least 50 possible stops. They are all loudly announced by a helpful computerised local sounding lady. I would like to know how many attempts it took for her to record 'thank you for flying with us' without bursting out laughing. Still it got us from T to A so I shouldn't moan.
After a pleasant couple of hours at the airport, and then in the skies, we arrived at Malaga Airport.
I have had a few worries while we were away as we left our motorhome in a tiny campsite that was run by two English people -Jeff and Irene - who we barely knew.
However, Jeff had been tracking our flight on the Internet and he picked us up five minutes after we phoned him. He whisked us off to Lidl for a quick supermarket sweep and then back to the van.
Fortunately I still had the keys in my handbag and the engine started first time. We jumped on board, plugged in the electric, filled up the water tank, fridge and cupboards and are settling in nicely.
It is still as lovely as I remember, and we start our travels again tomorrow - can't wait!