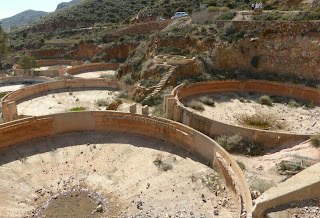 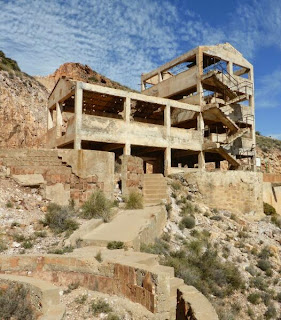 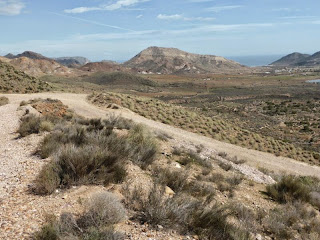 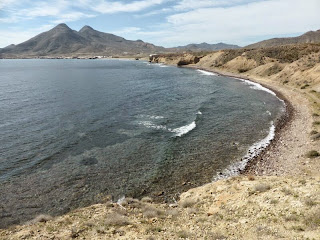 We cycled back to the Cabo de Gato Park today as we had heard about an abandoned gold mine at a little town called Rodalquilar and wanted to check it out.
We arrived at Rodalquilar after a very undulating ride and were shocked to find ourselves cycling past dozens of ruined houses on the way into town. It took us a while to find the route to the gold mine and, of course, it turned out to be up another steep hill, just behind the town.
It was nothing like I was expecting as there was a couple of ruined multi story buildings at the top of the hill, then enormous tanks stretching down the hillside to a big building with thick bars on all of the windows.
This building is now the museum and we found out that the gold bearing rocks were dug out of the high mountains behind the mine, and then sent in chutes from the top building down into the round tanks where the rocks were sifted, washed and smashed into little pieces. The rocks were then sent on a route into smaller and smaller tanks as the waste was gradually removed, eventually ending up in the bottom building where it was panned and sorted until it finally revealed the gold.
For 10 years, from 1956 until 1966 it worked very well, but then the gold ran out and the mine closed.
It had a disastrous effect on Rodalquilar and in 1966 the population reduced from 1,400 to 75, which explains all of the ruined houses.
It was a shocking story and very sad that the place is now a deserted ruin. Apparently the town has recovered to a degree and mainly relies on the tourists who visit this incredibly beautiful area.