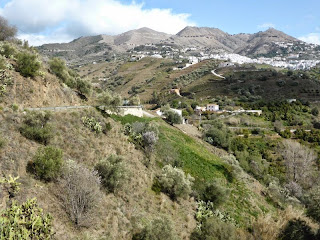 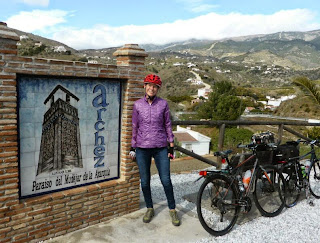 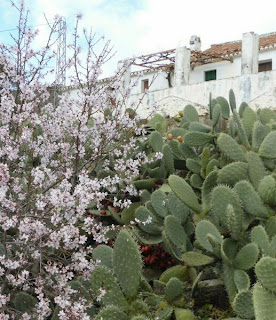 We decided to have a gentle bike ride, the first of the year, to the nearby town of Vélez-Málaga.
I decided that the direct route was too short, so chose a round about journey inland instead. Google maps is excellent for this, but as has happened to me before, it doesn't show the gradients. I did realise that it would be an uphill route, but I wasn't concerned. However, I should have been and this mistake was compounded by a very, very strong headwind.
It was very beautiful though and the roads were almost traffic free. We passed fields full of avocado, olive, pomegranate and cherry trees, with the pink cherry blossom already brightening up the hillsides. There was also huge mounds of prickly pear plants that the farmers use as impenetrable hedges.
Almost four hours after we started, worn out and cold, we rolled down the last slope into the town.
We could now begin the pleasant part of the day - the Tapas Tour. We had picked up a little booklet from the local Tourist Information that told us all about it. Until 1st March, 15 local bars are selling a drink and special tapas for 2 euros each.
Darren said he was so hungry that he could eat a horse, but it wasn't on the menu, so instead we enjoyed prawn, fish and ham in a little mysterious basket and vegetable couscous with spare rib.
We only managed two, as the wine was going a bit to our heads, so we will have to go back to try the remaining 13.