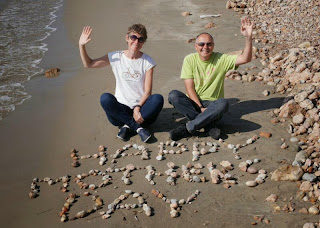 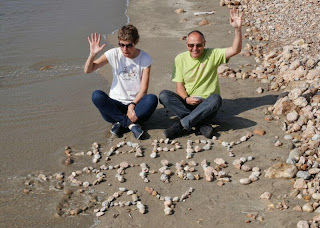 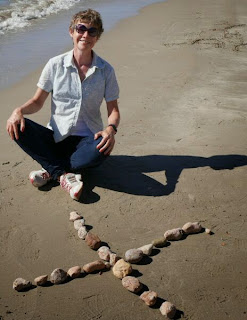 It's hard work writing with pebbles on the beach, and even worse if the tide is coming in while you are posing for the photo's!
As well as being mother's day, today was very exciting as we were taking part in our first ever triathlon.
We looked the distances up online and the shortest was called a Sprint Triathlon - we had to swim 750 metres, cycle for 20 kms and finally run 5kms.
We hadn't entered a race but we were doing it ourselves, as our campsite has a heated pool and the roads around here are very quiet, so it seemed like a fun thing to do.
Also, two of our sisters and brothers in law race in proper triathlons and we don't like to miss out.
We measured the route earlier in the week, and practiced the cycle and the run. It was really surprising as my legs felt like they were made of lead once I jumped off the bike and started running.
This morning we set our tent up as the transition and changing area, put everything that we needed in place and slightly nervously walked down to the pool.
We were going to start at 10am on the dot, but we were sitting on the edge of the pool at 9.55, so as we were also our own timing officials, we decided to start early.
I was confident that I would win the swimming section, but Daz had other ideas and leapt out two lengths ahead of me. He whizzed up to transition and was almost ready to leave by the time I got there.
It took me a while to get changed as my cycling kit seemed really tight and difficult to get on, but eventually I was off after him.
The cycling route involved a couple of loops, so we waved to each other, but I could tell that he was gaining more time.
Back at the run transition there was no sign of him, so I grabbed a drink and set off, and this time my legs only felt as if they were made of wood.
The running route was beautiful as it was along the promenade, which took my mind off it for a while, and I was pleased that Darren waited for me and cheered me across the finishing line.
My face was bright red by the end and it was hard going, but I really enjoyed it.
Darren finished in 1 hour 39 minutes and I took 1 hour 55. At first I was just pleased that I made it round, but once I got back I obviously had to see how fast other people did it. The fastest British woman in my age group at the 2014 world championships took 1 hour 18 minutes, so I have got a lot of room for improvement.