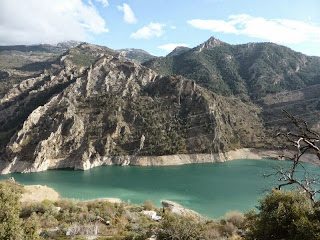 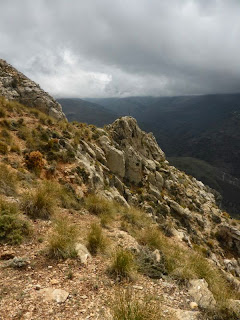 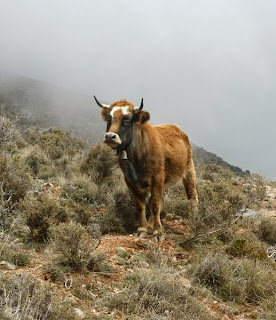 We are camping in the Sierra Nevada mountains above Granada and I was keen on a hike today to the top of the mountain behind our campsite.
I don't think Darren was quite so fussed, and the weather forecast wasn't great, but we got out our coats, hats and gloves and off we went.
It was uphill for a very, very long way and we struggled to get to the top. Once there we were above the surrounding cloud level and hadn't seen a single person all day, until suddenly about a dozen brightly coloured trail bikers appeared in the distance,  whizzed past us, then disappeared as quickly as they came.
A couple of minutes later the clouds came down and we were walking in a swirling fog. It was completely silent and it seemed as if we were in a dream world. Gradually as we walked we heard bells ringing in the distance, and then as the bells got closer we also heard loud bellowing noises.
It was all quite scary and we hurried on, then the clouds flew away and we were standing right in the middle of a herd of lovely coloured cows.  They all stared inquiringly at us as we stared back, particularly at their sharp looking horns.
They didn't move as we passed by, and I was very relieved as we headed down to the pretty town of Guéjar Sierra where we enjoyed a late Sunday lunch.
Later we were sitting in the van enjoying a coffee when I noticed that the sun was shining and the view was looking amazing.  I walked about 10 metres from our van where I took picture number one, best of the day!
It could be argued that we walked 14kms, including 1,000 vertical metres, when instead we could have just sat on our bottoms and looked out of the window.