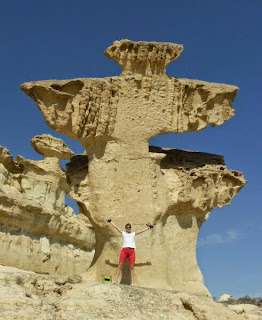 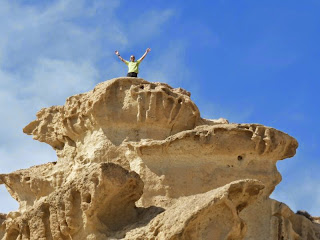 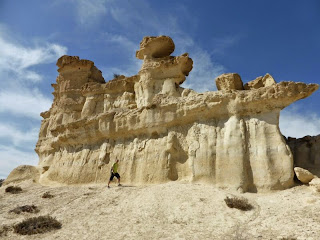 We had a little cycle along the coast to the back of a car park at a town called Bolnuevo today.
I had seen a few photos on the Internet of crazy shaped rocks and decided that we needed to go and see them.
I don't know anything about geology and the notice board made it all sound very complicated, but basically, I think that after millions of years of erosion, the rocks have become almost flower shaped, with stalks sticking out of the ground.
There was no one else around so we looked at them from all angles, then climbed everywhere, just enjoying the view and taking it all in.
As we were getting ready to leave a car pulled up and an English couple got out. They kept the car engine running and the lady ran to pose in front of the nearest rock, the man took a photo then jumped back into the car and drove over to pick the lady up and off they shot.
Sightseeing and photo took less then two minutes - speed tourism in action.