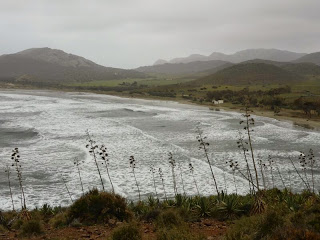 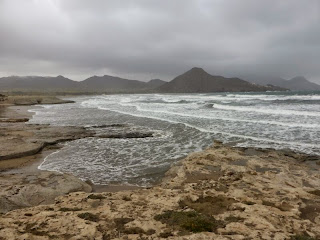 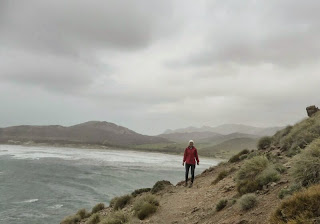 After we returned from yesterday's outing, the wind speed increased, the electricity cut out for a while, the Internet disappeared, and the campsite was hit by horizontal rain overnight.
It stopped raining by thus morning, and not to be deterred, we set off on yet another seaside hike. We parked the van in San José and set off in the opposite direction to yesterday.
The roar of the wind competed with the roar of the sea and we followed a little path that hugged the coast. We took a wrong turning at one stage and ended up on a sloping rock path where one slip would have been a disaster.
We had planned to walk as far as a beach where Sean Connery and Harrison Ford shot scenes from an Indiana Jones film, but we had had quite a lot of excitement for one day and it looked as if we could get caught in a massive downpour.
Luckily we got back to the van in the dry, but as I write this our campsite is under about three inches of water and thunder and lightning is rattling all around us.
It is all very surprising for a semi desert.