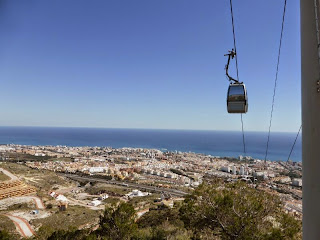 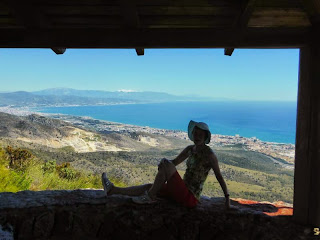 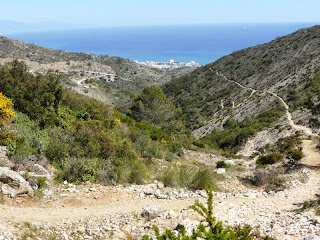 It has been a very windy couple of days so I had had to postpone our cablecar outing at Benalmadena for a while. It was all systems go today, although it was still very breezy as we got nearer to the top.  During the last few minutes of our journey, our car bobbed about like a cork in a very choppy stream, but we arrived safely and set off to explore the hillside behind the town.
There was an excellent walkway with fantastic views that stretched all the way to Gibraltar and the African coast in one direction, and with distant views of the snow covered mountains of the Sierra Nevada towards the west. Picture two is supposed to be an arty shadow shot, and a snowy mountain is on the horizon just to the left of my knee.
We opted not to catch the cablecar down, but instead to follow a trail on a map that was helpfully given to me at the ticket office.
It took a while to find the start point and then it seemed to be looking good and straightforward - pic 3.
Unfortunately, once we rounded the curve of the hill we lost the path and ended up walking in a large loop for ages, until we eventually managed to reach the coast.
I can't think what we did wrong, and we didn't see anyone else for almost all of the walk, so I think nearly everybody buys the return ticket.
It was a lovely, if very tiring journey on a beautiful day, but perhaps next time I would get the cablecar down too.