Round trip to San José 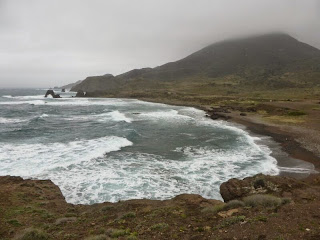 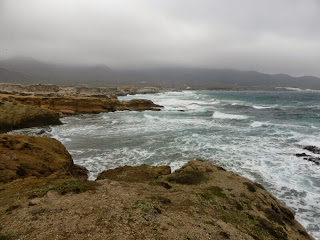 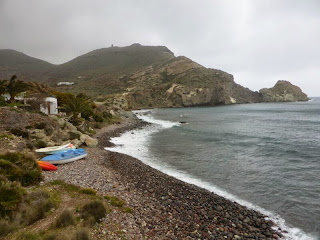 There must be dozens of San José's in the world, but this one is in the Cabo de Gata Natural Park.
The weather has not improved today and I actually got the chance to wear my gloves, hat and scarf - it reminded me of August in Scotland last year.
There's nothing wrong with a bit of dramatic weather as long as you are dressed for it, and in the end it didn't even rain anyway.
We started by following a rather boring unpaved road that took us inland away from the sea views, but then we veered off onto a rocky path that took us right up to the hilltops, then down along a pebbly beach, then back up along a narrow ledge round to San José.
It was blowing a gale by then so it felt dangerous enough to call it a proper walk.
We stopped for coffee then headed home via an inland route. The wind that had driven us there at super quick pace was now trying it's hardest to push us back to San José.
We got back eventually after about an 18kms round trip and the wind is now buffeting the van from all directions.