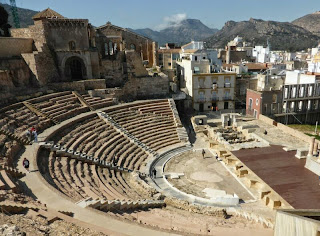 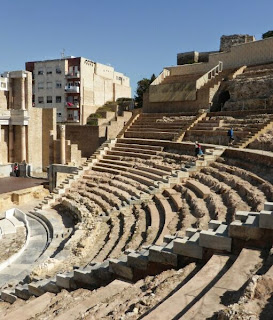 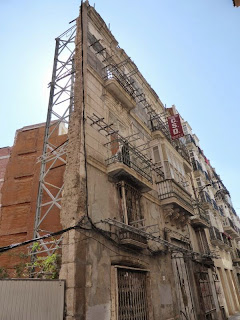 We cycled over a mountain today to Cartagena, arriving exhausted and ready for a coffee and a sit down.
After a quick pit stop our first visit was to the Roman Theatre. It was built in the first century BC and at that time it probably had loads of space around it, but 2,200 years later the whole theatre is completely surrounded by houses, shops and bars.
There is no easy way in, so the entrance is very surprising. We bought our tickets in a modern building about 100 metres away then caught an escalator underground, walked through a long corridor, then up again and out into the sunshine - right in the middle of the theatre.
Back out in the town again we were pleased to find that dozens of local bars were doing special wine and tapas deals this month, so we spent some time checking a couple of them out.
We also had a good look around the town and it is very pretty with narrow streets lined with tall imposing buildings. The really strange thing was that many of the buildings had just the front wall remaining and all of the rest of building was completely missing.
Where had all the rooms and roofs gone?  - I have no idea.