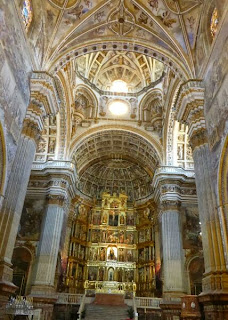 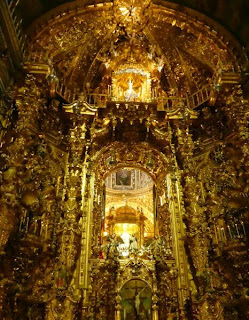 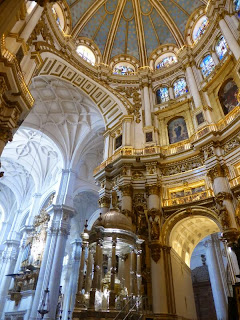 We caught the bus to Granada, and after checking TripAdvisor I decided that we should have a religious theme to the day.
We started at 10am sharp, just as the Monastery of San Jeronimo was opening. It is still used by nuns, was very peaceful and we were the only visitors in the beautifully decorated church (pic 1) as a nun played the organ and sang a hymn.
Our next visit was just around the corner to the Basilica de San Juan de Dios. We stood for ages in a little anteroom listening to an endless audio guide, but then a guide told us that a special room was opening shortly and that we should have a look.
We followed a lady who was jangling a set of keys. We went up an ornate staircase then she opened a secret door. There was no windows and the whole room was glistening with gold on the walls and ceiling, and a giant silver casket in the middle that held the remains of St John of God (I think).
The lady then took another key and slowly opened up two enormous doors covered in golden paintings and we were looking down into the golden church (pic 2) - totally amazing.
After leaving  the Basilica we stopped to sit in the sun and drink coffee with churros and chocolate, before heading to the Cathedral.
The Cathedral (pic 3) was the only place that was busy, it was also massive and very cold inside. We were maybe getting a bit blazé about all of the gold in Granada,  but this one seemed a tiny bit bare.