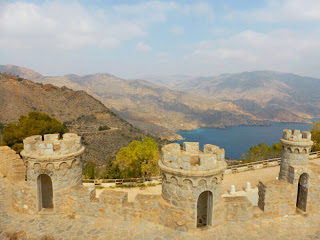 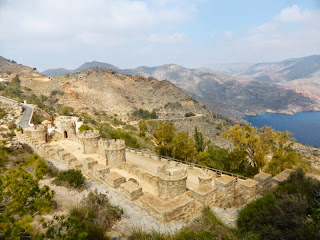 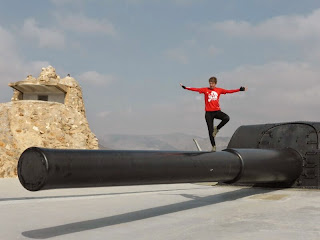 Our neighbours on the campsite told us about these nearby guns, so today we went to see them.
We cycled from the campsite through a deserted village surrounded by olive trees and then up and up, through the mountains and on to the end of the headland.
The first thing we saw was a fairytale style fort and beautiful views along the coast to Cartagena.
Behind the fort were two gigantic modern black guns pointing out to sea.
Explanations about the area are very sketchy, but the guns were definitely built in England in 1928 and weigh 88 tons each.
The only time that they may have been fired was in 1936 during the Spanish Civil War, and the whole place was eventually abandoned in the 1970's. The whole place has recently been refurbished and turned into a tourist attraction and it was a fantastic find, with a great bike ride.