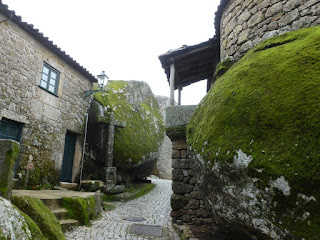 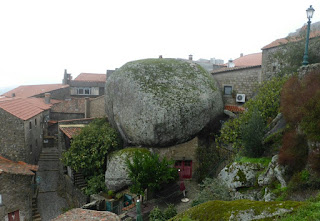 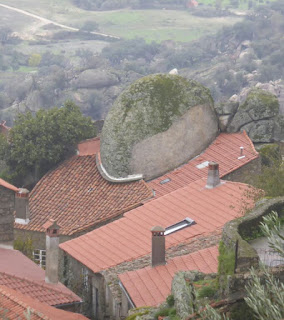 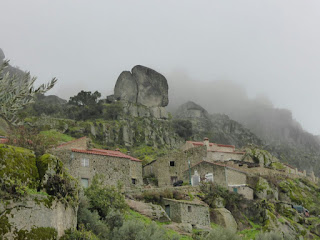 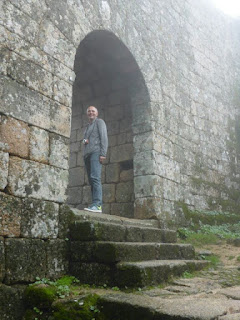 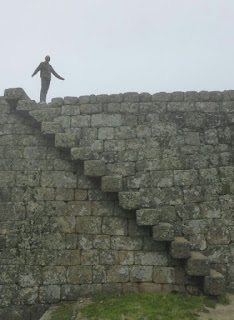 Today we took a trip across the border into Portugal to visit a place that we have been eagerly and impatiently waiting to visit.
In the 1930's Monsanto won the title of 'Most Portuguese village in Portugal'. I think that is quite a strange title, but I suppose that in England we have quite a fixed idea of what an English village should look like - thatched cottages, roses round the door, duck pond, cricket pitch, etc.
My vague opinion of a Portuguese village was nothing like the description that we read about in a magazine, so we just had to see it in real life. The weather was very unkind, but it added to the eerieness of the place.
Monsanto is near to the Spanish border, is very isolated and built on a steep hill amongst enormous granite boulders. The boulders act as floors, walls and occasionally roofs to the buildings, as you can see in my photos.
Above the village is a ruined castle that dates from around the year 1,200. It successfully withstood at least two sieges, but unfortunately in the year 1853 it was destroyed by an accidental explosion in the munitions storeroom.
Today it was completely covered by cloud so the place was a mystery to us. Some of the walls were still standing so we climbed up on to ramparts and rocks. We lost each other in the fog for quite a while until Daz suddenly appeared on the highest most dangerous looking wall.
We also found a very scary looking derelict church with what looked very much like open coffins carved into the rocks around it.
Nothing about Monsanto was how I expected a typical Portuguese village to look, but a very interesting day.