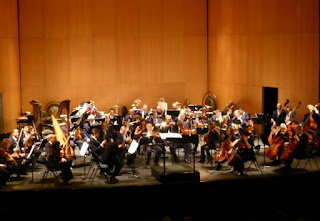 Last night we went out for a bit of culture, as the Orchestra of Cordoba were on at the local concert hall.
We had no idea what they were going to play, but thought that we might recognise a tune or two. As expected the smartly dressed musicians tuned up and then the conductor picked up his baton. From then on it started to get a bit weird.
The first piece was a total surprise as there was no tune or beat, but just random sounds, notes and silences. We were surprised and thought that it must be a one off modern piece.
It wasn't though and as the evening progressed the sounds got even more unusual, and the two percussion musicians at the back were particularly busy. They ran up and down randomly banging drums, shaking maracas, hitting some dangling pipes, and other non identifiable items that made strangulated noises. At the end of one piece, almost unbelievably, they fired a gun straight upwards towards the ceiling.
We sat through about 15 tuneless, beatless, pieces, but as time went on it got quite amusing and strangely entertaining. We were almost getting the hang of it, although you could never imagine singing along to any of it in the shower.
Eventually the lights came on and we thought it must be over, but no, the conductor invited a group of people from the audience onto the stage. Everyone started clapping and it turns out that they had written the music that we had been listening to!
We were then getting ready to leave when we found out that we had only reached the interval. The second half was much more traditional and I surprised myself by being disappointed.
Afterwards we met up with a couple from our campsite and went out to a tapas bar. People were still ordering dinners at midnight and we didn't get home until about 1.30am.