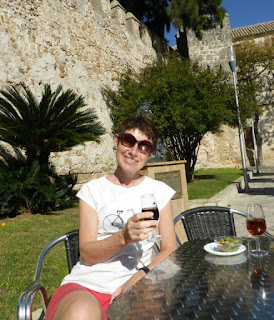 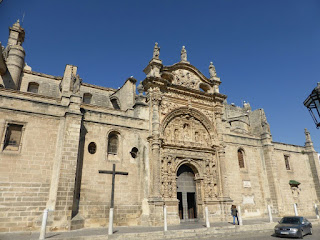 We were very pleased with ourselves today as we had worked out that the local cinema was playing the new James Bond film in English at 9pm.
We went out this morning, had a fantastic breakfast at a little cafe and went to check that we could find the cinema as it was was quite a long way from the campsite.
On the way we stepped inside a beautiful local church. A nice friendly guide gave us a psalm in English to read. Mine was about red hot coals, fire and sulphur being rained down upon the wicked. Daz's also had a similar theme.
Afterwards we located the cinema, and were happy that we were all set for tonight.
We arrived and took our seats at 8.59pm, bringing the total audience figure up to seven. By 9.05pm we were wiggling in our seats and wondering if we were in the wrong show.
By 9.15pm a Spanish guy sitting in front of us said that it was strange that the show hadn't started but that 'we were in Spain now'.
Eventually an employee turned up and told us that they couldn't get the film to play as they didn't have the right code!
Apparently it might work tomorrow or on possibly Thursday so he has given us replacement tickets. We are crossing our fingers in anticipation.