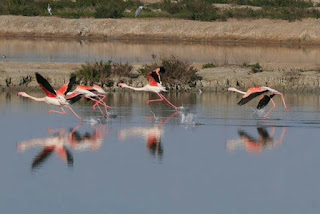 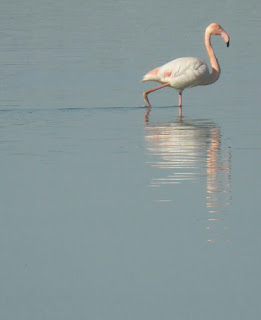 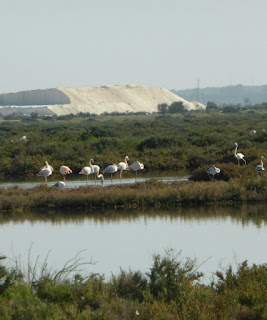 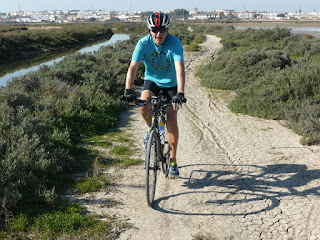 I had been told that there was flamingos living in the Bay of Cadiz, and until today we had not managed to track them down. I thought that they must be miles away from civilisation, but today we cycled to the salt pans and nature reserve just behind the local Decathlon store.
In the distance we could see buildings, roads, wind farms and factories, but as soon as we started cycling down the little track we entered a different world. It was so quiet and peaceful with a winding river, fields full of salty water that was gradually being evaporated by the sun and little paths between the fields.
We cycled near to a giant salt mountain and apart from a couple of fishermen by the river we didn't see any other people all afternoon.
Paddling and swimming in the water were avocets, herons,  seagulls and best of all, the flamingos, although they kept their distance from us.
It was a beautiful and almost enchanting place and I was so pleased that we found it.
Unfortunately, Daz got a bit too close to a group of about ten and suddenly they all started running, took off and then landed in a field about half a mile away.
He shouldn't have disturbed them, but they were only in the air for a minute and it was a very dramatic sight.