The sights of Jerusalem 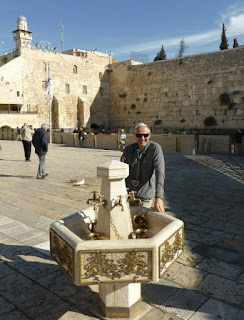 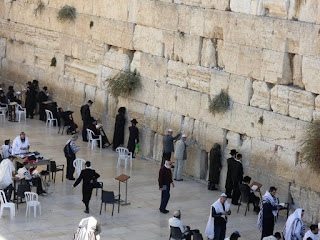 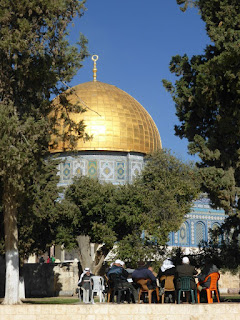 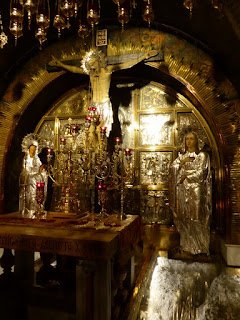 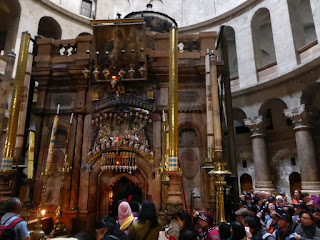 This morning our bus dropped us at the walls just outside of Jerusalem and our guide took us to see some of the most famous sights.
The holy city is the centre of three faiths, Jewish, Christian and Islam, and it is a constant balancing act to try to keep the peace in the city.
It is very heavily guarded and there are many soldiers on duty within the old city.
We started our visit at the Western Wall, also known as the Wailing Wall, and which is the most sacred place for the Jewish community. This is because it is very near to where a temple used to stand that was built by Solomon, although this was destroyed many hundreds of years ago.
We walked very near to the Wall and watched the faithful stand and touch it - picture 2.
We then walked to a staircase as built on top of the Wall is the Dome of the Rock. For Muslims this is their holy place and we were able to walk around it, but access to the area is very restricted for non believers - pic 3.
We then walked out of one exit beside the Dome and were almost straight on to the Via Dolorosa.
This is the route that Jesus took as He carried the cross on His way to be crucified. We walked the same route and saw the various places that He stopped along the way.
The whole walk was uphill and eventually we reached the Church of the Holy Sepulchre. This is a very large church and is built over the hill, called Calvary, where the crucifixion took place. Picture 4 shows the rock where He died, and a crucifixion scene above it.
On the other side of the same church is the tomb of Jesus - picture 5. We had to queue for a while here as there was more tourists about, but we stepped inside the tomb and right up to His shrine.
So today we have been immersed in religion in the most holy city in the world.