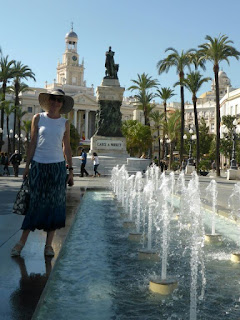 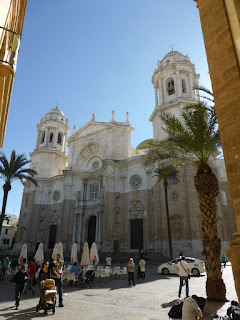 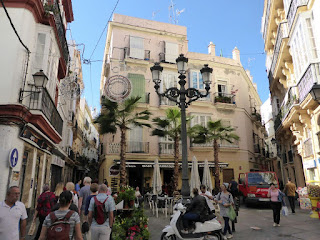 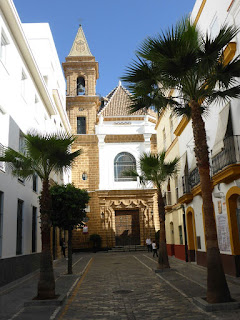 We caught the ferry across the bay to Cadiz this afternoon. First stop was for a gigantic pile of churros with chocolate sauce. Churros seem to be made of doughnut mix, but instead of being round they are shaped like long sticks that are deep fried then covered in sugar. They are so tasty, but I think that we have overdone it a bit today and I might avoid them now for a day or two.
Afterwards we staggered a few steps over to the main square to join a guided walking tour of the city.
Cadiz is the oldest city in western Europe and there are beautiful ancient buildings at every turn.
Pic two is the cathedral that took over 100 years to build and pic three shows our little group walking through a pleasant square where people were crucified during the Spanish inquisition.
There was an interesting fact about pic 4 but I can't quite remember it, but it was something to do with a tsunami in the 1700's.
We had a great day in glorious sunshine and tonight we are stepping out to watch James Bond at the local cinema.