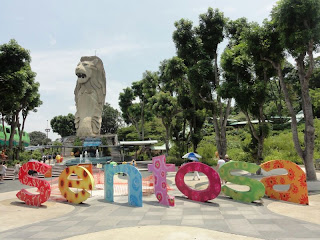 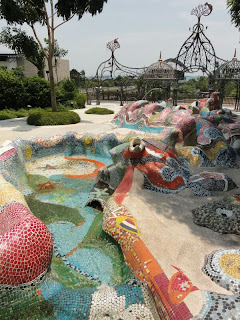 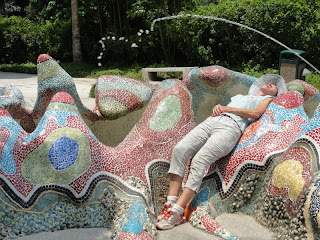 Oh my word, it's soooooo hot today!
Singapore is quite a small island (710 square kilometres - afraid I have no idea what that is similar to, but maybe the Isle of Wight). Anyway, at the bottom of it is an even smaller crazy island called Sentosa.
It is 500 metres away from Singapore and you can get there three ways, cable car, sky train or via a covered moving walkway.
Once on the island it is like a Disney World I think, although I have never been to one so can't really compare it properly.
When we set off this morning I had no idea of the above and thought we were going on a day trip to the beach.
It took quite a while to find the beach as it was hidden behind some of the many attractions and it was so hot we only stayed on it for about a minute. I did not even go for a paddle.
Instead we wandered around taking in the sights and trying out the sky train.
The attractions were pretty expensive so unfortunately we missed out on the Flying Trapeze, the Tiger Sky Tower, the Port of lost Wonder and the Skyline Luge amongst many others.
I did fancy cooling off in the Gaudi style water feature but, it being Singapore, there were many signs saying paddling was not allowed, so of course, no one did.