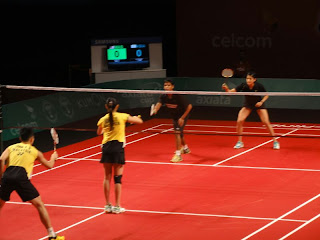 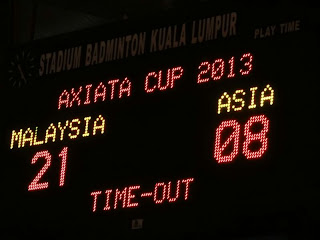 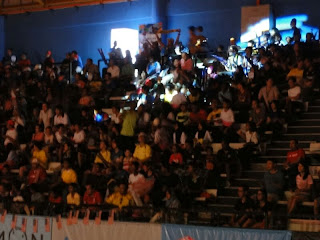 In KL and watching the badminton Axiata Cup. It is the richest badminton tournament in the world and we had been hoping to support team Europe, but they finished fifth so didn't make it to the semi finals.
The line up today was Malaysia against Asia, then Indonesia against Thailand.
Malaysia played well, with excellent support from the very biased crowd. I sat next to a very loud local guy with a vuvuzela who kept making me jump then apologising. They won their first three games so didn't have to play the fourth as they were already through to the final.
We were really disappointed as it would have been the men's doubles which is by far the best game to watch.
In the next semi Indonesia were the favourites and also had very loud supporters. We were really pleased when Thailand won the first game because we thought that meant that we would get to see the fourth game this time, but unbelievably, Thailand won all of their first three games to get through to the finals and knocked Indonesia out.
The crowd were shocked and went silent, even the guy dressed in an Indonesian flag, who was carrying a pretend trophy and beating a massive base drum.