Trying day getting to Penang 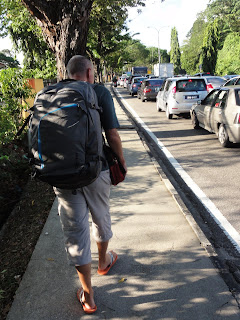 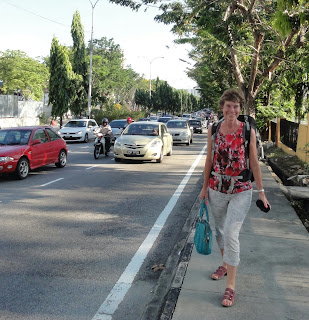 Spent the night in the Koreans spare bedroom/three star hotel and it was roasting as the aircon did not work and there was no fan. Decided not to stay for the second night so Darren told her this morning we were leaving (while I hid in a corner) and we set off for the bus station.
I went to buy two tickets to Penang.
The bus was supposed to set off at 10.30, but after a while it became obvious it wasn't going to go until they had filled it. It eventually got going at nearly twelve, so my patience was wearing a little thin. Also, the lady selling me the tickets hadn't given me my change and I had to return and get it from her.
Our bus ride turned into a magical mystery journey but we eventually crossed the bridge on to the island and could see Georgetown in the distance. I had checked before I bought the tickets that they were for Georgetown, but the bus stopped just after the bridge in the middle of nowhere and we all had to get off.
I was furious. We were told to wait for a local bus number 401 to get the last five miles but nobody knew when it was due.
After a day of inaction, I had no patience left, so we had to pick up our packs and start walking. We walked along the main road keeping an eye out for buses and eventually, after walking for about 40 minutes and getting hot, sweaty and bitten by something, we caught the 401 to town.
It was the same bus that came from where we were dropped off. The bus fare was the same, but I was so much happier after the walk and we got to Georgetown with a smile on our faces.