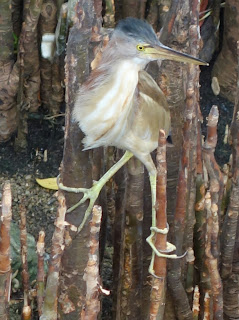 Really enjoyed our few days in Melaka and left today to catch a bus to Kuala Lumpur.
A friendly local man stopped us for a chat as we walked to the bus stop. He asked us if we were catching the slow bus or the express to Melaka Sentral bus station. We knew that there was only one bus so didn't quite get what he meant, but we pointed to where the bus had dropped us when we arrived. (There are no bus stop signs so it adds to the difficultly.)
He said that was the slow bus and the express was five minutes walk in the opposite direction. We caught it anyway and eventually understood what he meant. Our bus picked us up and did a huge  wander around almost every street in Melaka before heading back almost to where we originally boarded it and then set off on the two mile journey to the bus station.
The bus to KL didn't take much longer to do about 100 miles, but it was all interesting and we weren't in a hurry.
Arrived in KL and been out for some dinner. I had spicy carrot salad and it was so hot that I have burnt my tastebuds away completely. Hopefully they will return in the next few days.
Ps, thank you to Darren for lending me this fantastic photo of an ungainly and rather clumsy bird that we saw on the river bank yesterday near our hotel.