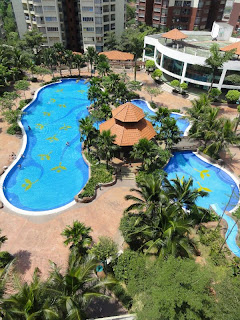 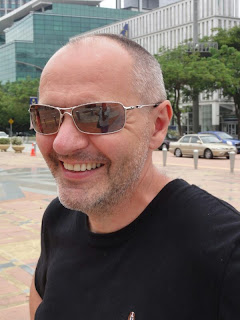 A bit of a strange day today. We decided to change hotels in KL as we wanted somewhere with a pool and a gym for a couple of days so that we could do a bit of exercise without getting too hot and sweaty on the streets.
Darren found a 'three room three star' hotel on Agoda that was really new on the site so had hardly any reviews. Reading between the lines we thought each room was actually a small apartment as it came with kitchenette, washing machine and living area.
Once we got here it became apparent that it is actually a rented apartment and the rooms are just bedrooms in the family flat. They are Korean and friendly, but the mother sits in the living room the whole time watching Korean tv.
We are just stuck in our room as we feel in the way and it has no telly!
We are here tomorrow as well and we have already paid, so rather than cause a scene we are going to stay and chalk it up to experience. Darren is also going to complain to Agoda as it isn't cheap and is taking the mick really.
It has a nice pool so it's not bad really, and we have been down and done a few lengths.
As soon as we got out of the water two local guys came over to talk to Darren. They looked a bit shifty and I wondered if they were going to try and sell him some drugs, but no, they wanted to know if they could have their photo taken with him on their phones.
Darren sheepishly obliged, and a security guard came over and told them off, so they went away.
I wonder if they wanted his photo as I think he looks like House from the tv series - what do you reckon?