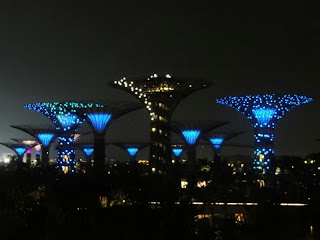 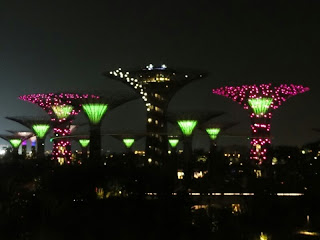 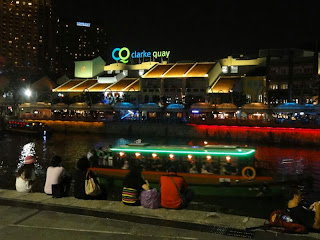 ..... and it wasn't until 7.45pm, but we still managed to miss it.
Had a nice slow wandering day today as we had nothing definite planned until late in the day. We were going to see the light show at the Supertrees.
It got to about 5pm and suddenly there was a flash of lightening and a thunder clap so loud that I nearly fell over. Daz told me off for over reacting, and we decided to go for a happy hour drink while watching the torrential rain.
It was at a bar overlooking the river at Clarke Quay and very relaxing. We then had some dinner and belatedly realised that we wouldn't now have time to get to the Trees.
Disappointed, we sat back and then found out that there was a second showing. Overall, it was a bit of an anticlimax, but that sometimes happens when you build things up.
We went to catch the MRT home and the sign said that a train was due in one minute. There was no one about and two 'down' escalators, so I took one and Darren took the other. Belatedly, I noticed that Darren's only went down about 10 metres to a platform, but mine carried on down into the centre of the earth.
I shouted to Darren and turned around and started sprinting up the escalator, but after a while I could see that I wasn't going to make it, so turned back around to run to the bottom and then back up the other side. I got to the bottom and 'surprise' I was in the right place and Daz was then running down after me!
Funny how nice it is when I am right and he's wrong. Unfortunately, I cancelled it out straight away by trying to go the wrong way at the next connection. .