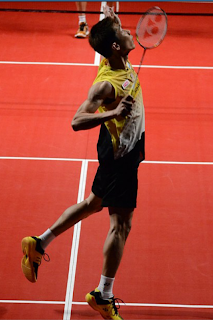 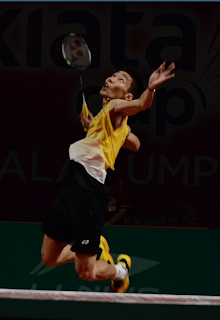 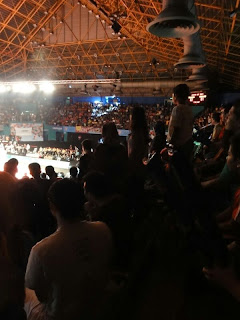 We got up early this morning and caught a train from KL to a new city about 20 miles away called Putrajaya. It is a purpose built administration centre for all of the government offices and is full of modern buildings nestling amongst a man made lake.
It was a good day trip for a Sunday, but the pictures aren't very exciting as the day was very hazy, so they haven't made it on to the blog.
However, made it back in time for the Axiata Cup finals this evening.
The whole building was packed with enthusiastic Malaysian supporters with drums, trumpets, flags,tambourines and shuttle cases.
We had been reading in the papers that the Malaysian world singles number one player, Lee Chong Wei would not be playing as he was injured, and then last Friday his wife had a baby, so we thought he would be too tired and busy.
However, he was there and the crowd were on their feet chanting his name when they realised he was playing. He dominated his game and played effortlessly and confidently - a real crowd pleaser.
You probably don't know him, but it would be like Andy Murray playing tennis in Glasgow, or Usain Bolt running the 200 metres in Jamaica.
Sorry I didn't take the pictures of him, but I would have liked to have (and I was there).