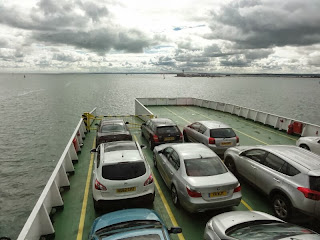 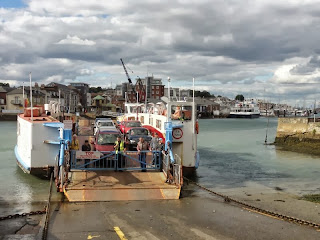 Struggled to get out of Henley this morning due to an enormous amount of road works.  We even got a bit worried that we might miss the ferry that we had booked to the Isle of Wight.
However, we actually got there in plenty of time and drove straight on to an earlier ferry. At the other side we set the sat nav up to get us to the campsite and it was only two minutes away in East Cowes, so we arrived much earlier than expected.
We went out this afternoon to explore as we are in the world famous yachting town  that was the birthplace of the Americas Cup.
To get across from East Cowes to Cowes, you have to go over the floating bridge. After speaking to the owner of the campsite and reading the guidebook, I had the impression that it was solid , but it was confusing as we couldn't see it on the Internet.
When we got to it, it was a cute little ferry that appeared to run across the small channel using large chains on either side of it. Apparently it is a chain bridge and there are only five remaining in Britain, but it is known locally, and inaccurately, as a floating bridge.
By the way, Cowes is very pretty - hopefully better pictures and a more interesting blog tomorrow.