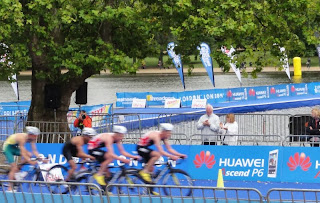 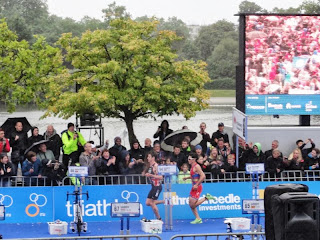 Exciting afternoon as we had tickets for the grandstand to see the World Triathlon Finals in Hyde Park. Unfortunately, it was outdoors and the weather forecast was for torrential rain and gales, but I was well prepared and made a lovely skirt out of a large bin liner to keep me warm and dry.
In the end the weather wasn't too bad and we had it very easy - we only had to sit and drink coffee while the competitors swam in the lake, cycled past us and Buckingham Palace seven times, and then ran 10 kilometres.
It was a very open race between the Brownlee brothers and Gomez from Spain. It was neck and neck between Jonathan B and Gomez as they passed us with less than 100 metres to go. The crowd were all on their feet, screaming and expecting JB to win, but the Spaniard pipped it and the crowd went silent and a bit mardy.
We all waited for Alistair B to finish a couple of minutes later - he was injured but bravely carried on - cheered loudly for him, and then went home before the winners ceremony.
Well it was nippy, and we were expecting a Hollywood ending.