Henry V in the hay 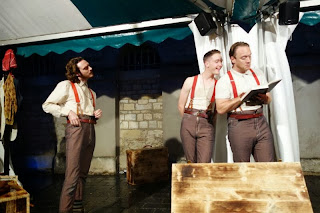 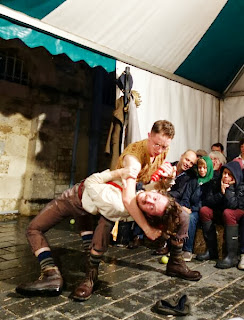 We were very cultural last night and went to Oxford Castle to see the William Shakespeare play Henry V.
It was supposed to be held outdoors and the audience follow the actors around to different parts of the castle.
Unfortunately, it was tipping it down with rain so it was held in a small marquee in the castle grounds instead. For some reason, there were no chairs to sit on, but they provided bales of hay with blankets on the top.
We read up on the plot in advance so that we had a better idea of what was happening.  It was one of those imaginative performances where they wear modern costumes and had minimal props, so the swotting up really helped.
There should have been quite a few characters in the play, but there were only three actors so they played loads of different parts. We were also on the front row so Darren and Paul both helped in the performance. Paul held a moustache on a stick for a while which I think was a Lord, and Darren even had a speaking part. He had to say 'oui' in response to questions about his elbow. He also got a kiss on his head by a character called Catherine.
I highly recommend it but the last performance was yesterday.